PHILOSOPHY OF REVELATION (1841–42)
and Related Texts Edited, translated, and with an introduction
by KLAUS OTTMANN Paperback original, 384 pages, $32
ISBN: 978-0-88214-066-7 Kindle/Apple Books edition, $9.99
ISBN: 978-0-88214-080-3
The first complete translation into English language of the 1841-42 lectures on “Philosophy and Revelation” by the German idealist philosopher Friedrich Wilhelm Joseph Schelling (1775–1854), which until now have been largely neglected in the English-speaking world. Schelling’s “Philosophy of Revelation” was never published during his lifetime. The historically most significant 1841-42 lectures in Berlin exist only in transcriptions, which form the basis of this volume. Translated, edited, and annotated by Klaus Ottmann, Philosophy of Revelation (1841–42) and Related Texts pairs Schelling’s influential lectures with some of the philosopher’s earlier writings and lectures on the subject of philosophy and religion, such as his 1798 text on “Revelation and National Education”; his 1802 Jena lecture “On the Historical Construct of Christianity”; and his 1827 inaugural lecture in Munich. The transcription of Schelling’s Berlin lectures made by the theologian Heinrich Eberhard Gottlob Paulus and published in 1843 is considered the most complete record of Schelling’s widely anticipated lectures on mythology and revelation given between 1841 and 1842 at the University of Berlin. The lectures were attended by a large audience that including many distinguished names, such as Søren Kierkegaard, Alexander von Humboldt, Friedrich Engels, and Mikhail Bakunin. Word of these lectures traveled as far as New York where a translation of Schelling’s 1841 inaugural lecture was published in 1843 in the Transcendentalist magazine The Dial. However, Paulus’s transcription is not without controversy and errors, thus this edition has been augmented with some of Kierkegaard’s notes of Schelling’s Berlin lectures, taken between late November 1841 and February 3, 1842, as well as with references to Schelling’s posthumously published Philosophy of Revelation, which was based on various lectures given by Schelling in Berlin between 1841 and 1847, to help the comprehension of this often difficult text. 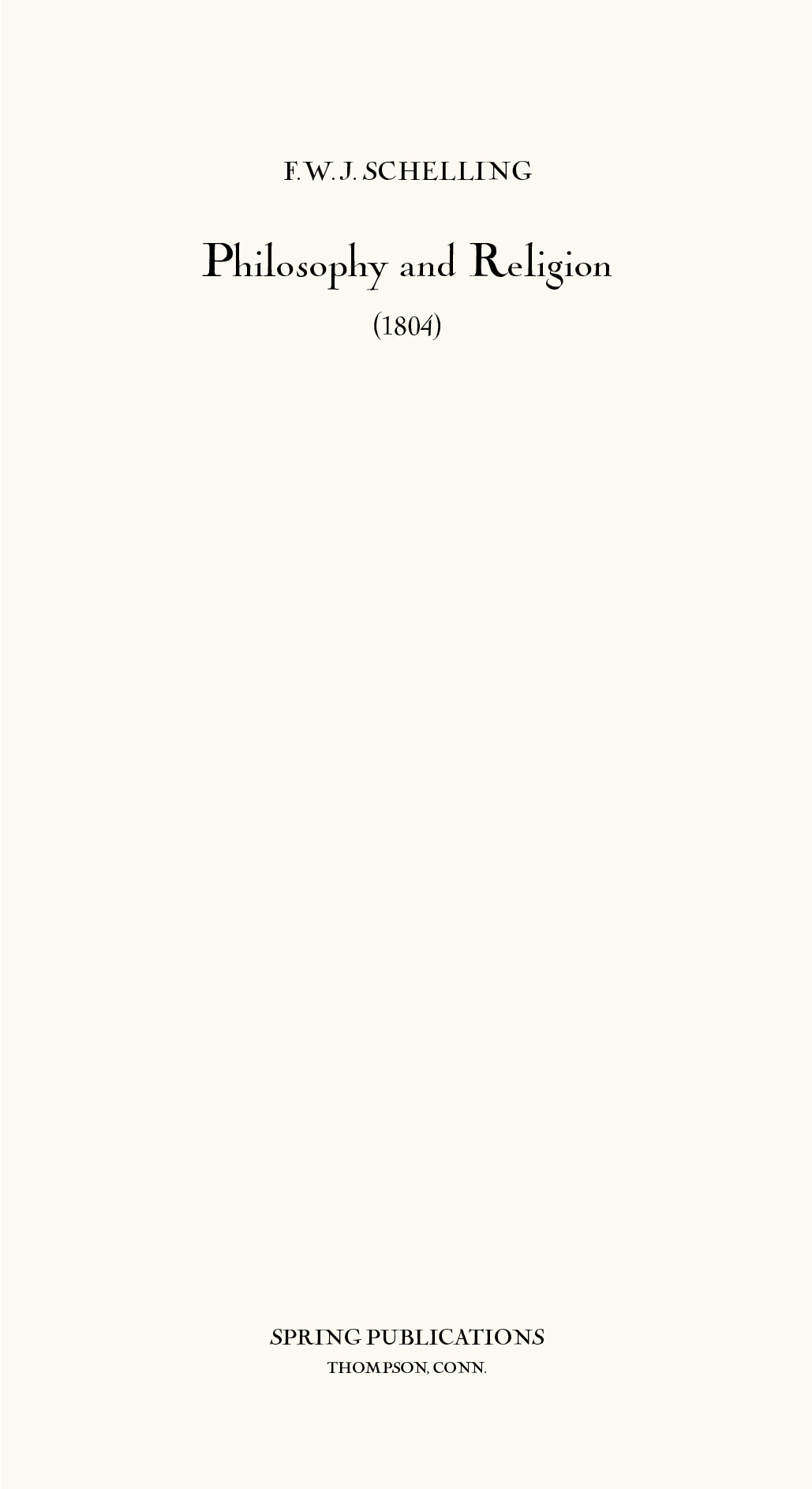 PHILOSOPHY AND RELIGION Translated, with an introduction
by KLAUS OTTMANN Paperback original, 112 pages, $20
ISBN: 978-0-88214-593-8 Kindle/Apple Books edition, $9.99
ISBN: 978-0-88214-591-4
For Schelling, Philosophy and Religion represented a new approach to the goal initially set in 1801 with his Representation of My System of Philosophy, the first system of philosophy he had conceived entirely on his own, after having seen “the light in philosophy,” which led him to philosophize, as it were, out of the Absolute itself: “All philosophizing begins, and has always begun, with the idea of the Absolute come alive.” In Philosophy and Religion, Schelling tackled the problem of the manifestation of the finite world and human freedom by evoking Plato and Spinoza, yet by his own admission he did not reach his goal “with complete determinateness” until 1809 when he published his Philosophical Investigations into the Essence of Human Freedom. Because it is the only work prior to the Philosophical Investigations that discusses the issue of freedom of will, it is regarded as a precursor to Schelling’s 1809 magnum opus on human freedom.
❝
Each of us is compelled by nature to seek an Absolute, even those still wrapped up in finite things, but if we want to fix our thoughts on it, it eludes us. It hovers around us eternally, but, as Fichte has said, it is only there if one does not have it; as soon as one possesses it, it vanishes. It appears before the soul only at the moment when subjective activity joins the objective in unexpected harmony, which because it is unexpected has an advantage over free, desireless rational cognition to manifest itself as happiness, as illumination, or as revelation. But as soon as this harmony is brought about, reasoning sets in, and the apparition takes flight. In this fleeting form, religion—inasmuch as it is also still in the domain of reflective cognition and dividedness—is a mere apparition of God within the soul. In contrast, philosophy is necessarily a higher and, as it were, a more tranquil perfection of the spirit; it is always within the Absolute, with no danger of the Absolute running away from it.
—Schelling, Philosophy and Religion, p. 9